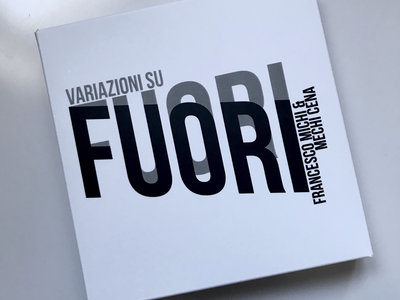 Cardboard Box (cm. 14 x 14 x 2,6) containing:
6 Paper panels (1 panel cm. 27 x 27; 2 panels cm. 41 x 27; 3 panels cm. 54 x 41) with the verbal score of the piece autographed by the artists, all the performer texts, liner notes and photographs
1 audio CDr (with the binaural recording of the 8-voices final performance)
1 data DVDr (with 8 single WAV tracks, all the texts by the performers in PDF, liner notes by the authors, photographs and a video of the first field recording, plus all the graphics of the printed stuff both in English and in Italian language).


FUORI is a creation by Giuseppe Chiari, the world renowned Fluxus artist, dated 1965, that is usually performed (even if performances are quite rare) in concert situations or happenings. It is a verbal score: there is no music notation, only instructions; there are no directions about time duration. The performer has to describe the sounds he listens in that very moment.

Francesco Michi and Mechi Cena conceived "Variazioni su FUORI" as a new piece, a non-canonical version of Chiari’s score, with several performers located in a non-concert space and setting. In this occasion 8 performers recorded simultaneously their version of FUORI: all in the same location they described the same sound space, accordingly to the criteria of the score.
After that, Michi and Cena arranged a multichannel reproduction of these “tales of the listening”, trying to guess what acoustic imagery they offer us and how this can help our imagination to build a new, sustainable world of sound.

The "Variazioni su FUORI" created by Michi and Cena are a sort of further investigation which, starting from a particular idea of listening, updates and develops it, finally going to invest different and multiple artistic fields. Not only the sound, but also the language, the performance, the listening and the understanding of the "sound landscape". A multifaceted development which ideally unites Chiari with Raymond Murray Schafer and which, today more than ever, is extremely topical and interesting.

The enclosed audio CD contains the “final” binaural stereo version, where the individual tracks have been assembled and mixed, reconstructing, as far as possible, the position in space of the performers in the first performance. You are recommended to listen to the CD in headphones, possibly in darkness or closing your eyes.

The data DVD instead contains the 8 “single parts” (in WAV files), each of them mixed with a background recording of the sound environment of the garden. In addition, in the DVD you will find an iconographic documentation of the original performance: a video made and edited by Elsa Mersi and photographs by Sergio Garbari. Plus PDFs of all the texts (by the authors and the performers) in Italian and English.
All completed by 6 folding panels (score of the piece -with the autographed signatures of the artists- texts, photos, map of the place of the performance). Every box is numbered.

ships out within 3 days
edition of 50